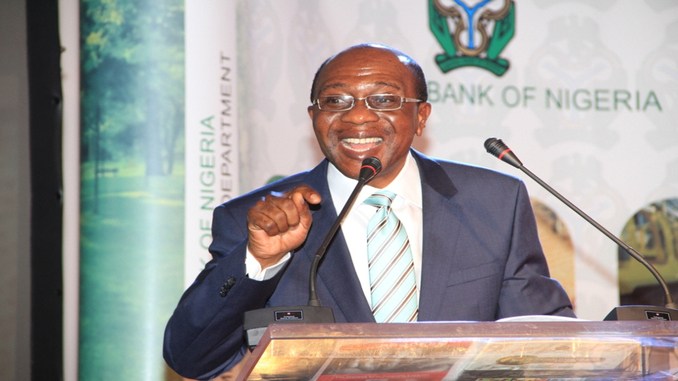 The Monetary Policy Committee of the Central Bank of Nigeria on Tuesday said the 0.55 per cent Gross Domestic Product growth rate, which took the economy out of recession, was still fragile.
The Governor, CBN, Mr. Godwin Emefiele, said this when he read the decision of the committee after its two-day meeting.
He said that the MPC further noted that although the recovery was weak, it was hopeful that the active implementation of the 2017 budget could boost aggregate demand and employment.
The need to boost aggregate demand and stimulate growth, according to him, is a major reason why the committee decided not to tinker with the monetary policy rates.
To this end, Emefiele said out of the seven members of the MPC, who were present at the meeting, six of them voted for the retention of all rates, while one voted for the easing of the lending rate.
He stated that the Monetary Policy Rate was retained at 14 per cent, while the Cash Reserve Ratio was also retained at 22.5 per cent and Liquidity Ratio at 30 per cent.
Also, the Asymmetric corridor was retained at +200 and -500 basis points around the MPR.
The committee has been holding the rates since July 2016.
On the argument to hold the rates, Emefiele said the committee believed that the effect of fiscal policy action towards stimulating the economy had begun to manifest as evident in the exit of the economy from the 15-month recession.
He explained, “The committee applauded the exit of the Nigerian economy from recession but observed that the growth remains fragile and, therefore, hopes that complementary fiscal and monetary policies will sustain the growth momentum. Although, it seems fragile, the fragility of the growth makes it imperative to allow more time to make appropriate complementary policy decision to strengthening the recovery.
“Secondly, the committee was of the view that economic activities would become clearer between now and the first quarter of 2018 when growth is expected to have sufficiently strengthened.
“The most compelling argument for a hold was to achieve more clarity in the evolution of key macro economy indicators, including budget implementation, economic recovery, exchange rate, inflation and employment generation.”
Emefiele stated that in arriving at the decision, the MPC was committed to employing maximum flexibility to guide the economy on the path of utmost growth.
The governor spoke on the concern raised by a member of the MPC, Dr. Adedoyin Salami, over the rise in the CBN’s financing of the government, which he noted was limiting private sector access to credit.
Salami, had in a communiqué no. 114, said monetary data showed a sharp rise in the extent of the CBN financing of the Federal Government’s 2016 deficit.
He had said the CBN had become a “piggy bank” in which over N1.5tn had been moved to service debt as of April 2017 from N3bn at the end 2016.
But reacting to the claim, Emefiele said the apex bank had not over-funded the activities of government.

He said, “Let me state categorically that the CBN has not over-funded the Federal Government. The Federal Government, on its own, decided that all its funds, both in local and foreign currencies, should be moved to the Central Bank of Nigeria, into the Treasury Single Account.
“It is important to put it in perspective. You as a customer of a central bank or any other bank, and you have fixed deposit in an account and for some reasons, you want spontaneous financing to meet your obligation.
“If you approach your bank to allow you to over-withdraw from your account temporarily, your bank will. So this have nothing to do with the CBN or any other bank. The assurance I will give to you is this: There is no truth in the issue of overfunding, because whatever is overdrawn is far less than what the Federal Government also has in its TSA.
“So basically, all this has to do with lack of understanding of the operations of the CBN.”
Emefiele also refuted the claims that many commercial banks had very high Non-Performing Loans, which are higher than the benchmark NPL rate of five per cent.
He said that the majority of the Money Deposit Banks had their NPL ratio hovering below or slightly above the five per cent benchmark.
He, however, agreed that the NPLs of some few banks were way above the benchmark rate.
The governor said the CBN would continue to do all in its power to ensure the sustainability of the Nigerian banking system.
The governor stated that the committee commended the Federal Government for issuing the Executive Orders aimed at improving the ease of doing business in the country.
It also noted the efforts of the government to create jobs in the agricultural sector with the inauguration of the Presidential Committee on Job Creation, targeting at least 10,000 jobs in each state of the federation over the next six months through a boost in agricultural support and funding.
The committee enjoined the state governments to work with the presidential committee to actualise the plan without further delay.
The governor said the MPC also noted with satisfaction the directive of the Federal Government to all states to promptly pay outstanding salaries in order to boost aggregate demand.
It also commended efforts to clear outstanding contractor arrears; prompt settlement of trade disputes with certain unions of the organised labour, including the Academic Staff Union of Universities and health workers; as well as the release of money to settle outstanding entitlements of the erstwhile workers of the defunct Nigeria Airways.
These efforts, Emefiele noted, would improve aggregate demand and strengthen the weak recovery.
Follow Us on Twitter!