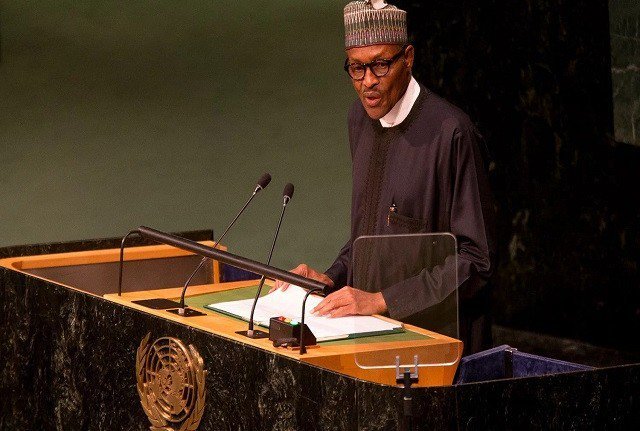 By Eric Patrick,
President Muhammadu Buhari on Tuesday ​called for on restructuring of the United Nations.
In his speech to the UN Assembly, Buhari said how to restructure the world body should be priority number one.
Nothing that “several ideas are out there”, he added that what must be done is to get them together and agree on what works for majority of the people of the world.
His full speech below…
The president of the United Nation’s General Assembly, Your Excellencies, Heads of States and governments, Distinguished Delegates, Ladies and Gentlemen.
On behalf of the government and people of the Federal Republic of Nigeria, I congratulate you, Mr. President, on your election to preside over the 72nd session of the United Nations’ General Assembly. I also wish to express my country’s appreciation to the Secretary General of the United Nations, Mr. Antonio Guterres, for his steady leadership and this body’s dedication to the search for a peaceful and equitable world through the charter of the United Nations.
Every year we gather here to deliberate on the affairs of the world. Sometimes we implement what we talked about and move humanity an inch closer to that ideal relationship as members of the world community.
At other times, we have our talks and end up not implementing anything to the disappointment of millions and millions of people around the world who look up to this body to provide leadership in a world that is constantly oscillating between advancement and doom.
In all of these, we often forget that what we have accomplished in the last 72 years is unprecedented in the annals of human history. The world may be badly governed, but the fact that there is a form of governance agreed upon by all is an accomplishment in and of itself. So, I congratulate us all.
Mr. President, as we say in Nigeria, he who does not look ahead remains behind. Our charge now is to aspire to make this world better for the next generation. We, the generation that knows how the world was before the United Nations was formed, must bequeath to those coming behind us a better United Nations that would be in a position to deal with the challenges of tomorrow. To accomplish that, we need to fast forward the reformation long proposed in this chamber.
​
To restructure or not to restructure is no longer the question – the United Nations must be restructured for it to remain relevant in years to come. How to restructure the United Nations should be our priority number one. Several ideas are out there. All that we need is to get them together and agree on what works for majority of the people of this world.
As a leader of one of the leading African nations, I want to see a United Nation’s Security Council that is expanded to have one or two African permanent members with veto powers. It is a fair thing to do – one that will benefit the world by giving it a chance for a more balanced outlook to matters of importance to us all. As we have learned in Nigeria, sometimes you need to change in order to remain the same. It is the first principle of renewal.
In the continent of Africa, the post-colonial era is going into a new phase. In another generation, there would not be any African alive who could remember when European powers once governed Africa. That emerging generation is creating new challenges for the African order left behind by the colonial powers.