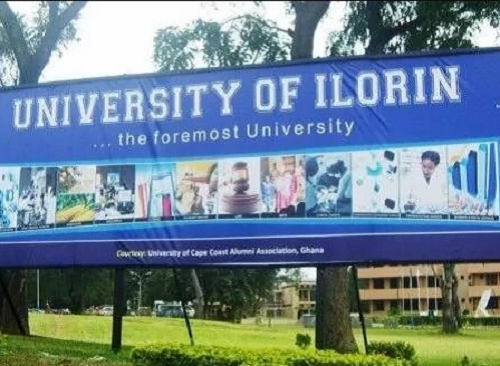 The University of Ilorin UNILORIN has been proscribed as a terrorist organization by the Academic Staff Union of Universities, ASUU.
The ASUU took the decision over the purported sack of its branch chairman, Dr Kayode Afolayan for blowing the  whistle over alleged corrupt activities of the outgoing vice chancellor of the institution, Professor Abdulganiyu Ambali.
ASUU in a statement signed by Dr. Ade Adejumo,  its zonal coordinator for Ibadan, and Dr. Deji Omole, chairman of the University of Ibadan branch, noted that suppressing genuine whistle blowers who provided evidences through threat of sack is against the avowed commitment of the President Muhammadu Buhari’s administration to fighting corruption.

ASUU therefore called on President Buhari to show genuine interest in the corruption going on at the University of Ilorin and victimisation of citizens committed to fighting corruption.
The union also condemned the connivance of institutions of government such as the Economic and Financial Crimes Commission (EFCC), the Independent Corrupt Practices and Other Related Offences Commission (ICPC) and Federal Ministry of Education who it alleged have turned deaf ears to petitions written against UNILORIN outgoing vice chancellor over smuggling his wife into the institution and promoting her to the rank of senior lecturer against the constitution of the university and other odious corruption since it submitted petition to them since 2016.
The union condemned the purported sack of the ASUU chairperson of UNILORIN, Dr. Afolayan for whistle blowing about the corruption going on in the institution, insisting that it was height of impunity to sack a person whose sin is  exposing the ills in the university.
While calling on Adamu Adamu, Minister of Education, to wade into the crisis before it balloons into the 2001 sack of 49 lecturers in the same university, ASUU vowed to resist this unlawful termination of appointment of its chairperson.
The statement reads in part: “The outgoing Vice-Chancellor, Prof. Abdulganiyu Ambali took all these to an unprecedented height when in 2015, he smuggled his wife, Dr (Mrs) Taiwo Toyin Ambali, into the University through the temporary appointment route as Lecturer 1. By 2016, less than one year later, she had been promoted to the rank of Senior Lecturer, when the Regulation specifies at least three years before such a promotion could take place.
“Our branch Chairperson, Dr Kayode Afolayan, on behalf of the union, signed a letter addressed to the Council to look into the infringement against the university Rules and Regulations committed by Prof Ambali. However, rather that retrace his steps, the outgoing vice chancellor issued a query to the branch chairperson, Dr. Kayode Afolayan, alleging that they circulated an unspecified “leaflet” against the vice-chancellor.
“The union promptly alerted members of the public to the evil plans of Prof Ambali to sack our officers in Unilorin. Just yesterday, 21st September, 2017, the University Administration completed another cycle of impunity, lawlessness and disregard for due process with the termination of appointments of the branch Chairperson. Gentlemen of the press, this very unfortunate development has again exposed the evil going on in the University of Ilorin.
“The University has devised all means to suppress legitimate industrial activities in order to avoid exposure of its misdeeds. Indeed, the University prides itself in its ability to “kill off” staff and students that are connected in any way to ASUU leadership. This hate crime on the part of the University is usually carried out under the guise of uninterrupted academic calendar.
“Yet, many Universities have also maintained a stable academic calendar without destroying union members or their careers. To all intents and purposes, UNILORIN has become a terrorist organization as far as industrial relation is concerned. Equally worrisome is the seeming connivance of relevant authorities with Unilorin in its dastardly pursuit. For example, our union, since December 2016, had submitted petitions to the EFCC, ICPC and the CCB but until now results of ongoing investigations have not been made known to the public.

“Our union also wrote petitions to the Ministry of Education and the Visitor to the School but no concrete step has been taken. The silence by these relevant agencies and authorities casts serious doubt on the commitment of government in the anti-graft war especially in the University of Ilorin where there are glaring manifestations of corruption.
“This has emboldened UNILORIN to embark on the victimization of the whistle blowers in the University. Our union wishes to reiterate that it will not sit by and watch the continuous victimization of its members in the University of Ilorin. We warn that the crisis of the University of Ilorin is once again on the verge of ballooning into a national crisis reminiscent of 2001 when the same University sacked 49 academics in one fell swoop.
“The Union calls on all well-meaning Nigerians and the appropriate authorities to intervene urgently to restore justice in the University and stave off a needless crisis. Members of the public and the press are also to take note that, in line with the Union’s constitution and code of practice, the purportedly sacked Chairman of the branch remains the bonafide Chairman of the Union in UNILORIN.
“The University of Ilorin had on the 19th September, 2017 in a letter titled Termination of appointment signed by the Registrar and Secretary to the Council of the University E. D Obafemi stated that Council at its 155th meeting held on Monday 28th August 2017 considered the report from the 41st meeting of staff disciplinary committee held on Wednesday 7th June 2017, 8th June 2017 and Thursday June 2017 and approved that your services are no longer required. Consequently it directed that you should be relieved of your appointment. Accordingly your appointment is hereby terminated with effect from the date of this letter.
Follow Us on Twitter!