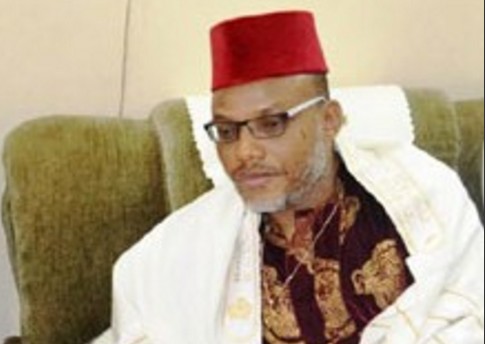 The leader of the Indigenous People Of Biafra, IPOB, Nnamdi Kanu, has challenged the court order proscribing his group and declaring it a terrorist group.
In a statement on Friday, Mr. Kanu’s lawyer, Ifeanyi Ejiofor, said the motion challenging Wednesday’s court order was filed on Friday.
According to the motion, dated September 21, Mr. Ejiofor argued that IPOB is a non-violent organisation; therefore the decision of the Abuja Division of the Federal High Court to issue an order, based on a motion made ex-parte, was illegal.

A motion ex-parte is a motion heard by the court without the presence of the other party/ parties.
The lawyer added that his client, whose whereabouts has been unknown since the violent crisis in Abia started two weeks ago, was not allowed fair hearing and that the court lacked the jurisdiction to grant such an order.
The Nigerian government on Wednesday obtained an order of court, affirming the declaration of IPOB as a terror group.
The group, which seeks an independent country of Biafra, has been accused of killing and intimidating civilians and security operatives by the Federal Government of Nigeria.
Follow Us on Twitter!