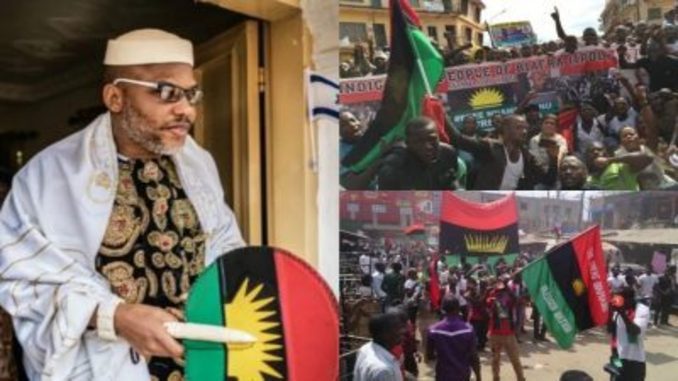 IPOB said its prayers is being sought on the grounds that the court order proscribing the IPON was made without jurisdiction and granted against any entity known to law. The pro-Biafra group said there is a clear suppression and misrepresentation of facts in the attorney general’s affidavit evidence, pursuance to which the order was granted.
The group added that the order is unconstitutional and was made in clear violation of the constitutionally guaranteed right of the IPOB to self determination; Article 20(1) of the Africa Charter on Human and Peoples Rights, now domesticated into Nigerian Law under (Ratification and Enforcement Act) (Cap 10) Laws of the Federation of Nigeria 1990; Right to fair hearing, Right to freedoms of expression, and the press and Rights to peaceful Assembly and Association; clearly provided for under Sections 36, 39 and 40 of the 1999 Constitution of the Federal Republic of Nigeria as (Amended) 2011.
The motion on notice was supported by an affidavit written by Prince Mandela Umegborogu, an associate solicitor in the Law Firm of I.C. Ejiofor & Co. The court in its order also banned the IPOB and its activities all across Nigeria. The court in its order declared the IPOB and all its activities as ‘acts of terrorism and illegality’.
Follow Us on Twitter!