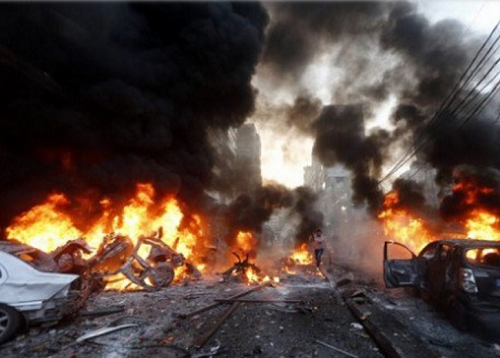 Four persons were on Monday killed after an explosion hit the jetty of the Petroleum Wharf, Apapa, Lagos State.
It was gathered that a vessel, identified as Histria Ivory, was discharging Premium Motor Spirit (petrol) around 3am when some hoodlums besieged it to scoop fuel spilling from the vessel, which resulted in the death of four people.
Officials of the Lagos State Emergency Management Agency, men of the Lagos State Fire Service, Federal Fire Service, Nigerian Ports Authority and the Nigerian Navy were said to have been called when the jetty’s in-house fire unit could not handle the inferno.
The Director of the Lagos State Fire Service, Rasak Fadipe, who confirmed the explosion, said he could not tell if there was any casualty.
He said, “A vessel was discharging fuel and the manifold caught fire, which led to an explosion.

“The jetty in-house fire unit responded first, before calls were made to other fire agencies. We all battled the fire and put it out.”
The Nigerian National Petroleum Corporation, in a statement on Monday, said the fire was caused by hoodlums who interrupted the discharge of fuel.
A statement, which was signed by the NNPC Group General Manager, Group Public Affairs Division, Ndu Ughamadu, assured motorists and other consumers of petroleum products nationwide that the fire would not affect the supply of petroleum products.
He said, “The NNPC has deployed a team of engineers in the jetty, while the repair of the affected parts will commence immediately.
“The fire was caused by the activities of hoodlums who were scooping fuel spilled from ships discharging fuel at the jetty.
“NNPC Group Managing Director, Dr Maikanti Baru, who has been fully briefed on the incident, described the occurrence as unfortunate, assuring the public that the NNPC has more than 1.6bn litres of Premium Motor Spirit, otherwise called petrol, enough to last for 48 days.”