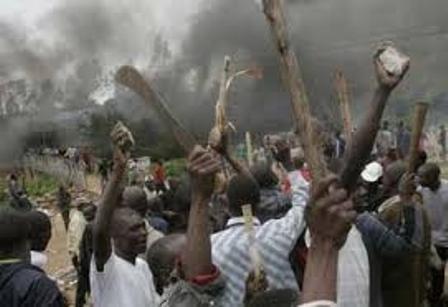 Commercial activities and vehicular movements were paralysed at the weekend in Omuo Ekiti, when Ekiti East Local Government youths staged protest against alleged illegal suspension of Mr Ojo-Ade Fajana, representing the area in the state House of Assembly.
The Assembly had recently suspended the legislator for a period of 101 legislative days without pay, in the first instance, “except he shows signs of genuine remorse.”
While on suspension, he was also barred within one kilometre radius of the Assembly complex and he must submit all properties of Ekiti State House of Assembly in his custody to the clerk of the House.
Another member representing Ikole Constituency 1, Mr Gboyega Aribisogan, had earlier been suspended last year over gross misconduct.
According to the Chairman, House Committee on Information, (Dr) Samuel Omotoso, the suspension came into force after the disciplinary committee set up by the Speaker, Kola Oluwawole, to investigate Hon Ojo-Ade submitted its report at plenary.
However, placard-carrying protesters thronged the major road leading to the local government headquarters, Omuo Ekiti, thereby halting movement of vehicles in and out of the community for several hours.
The protesters, who sang solidarity songs, demanded immediate and unconditional reversal of the suspension of Fajana within one week by the Ekiti State House of Assembly.
Speaking on behalf of the protesters, Comrade Olajide Samuel, who is the President of the group, said that the entire Constituency 1 in Ekiti East Local Government had been denied of representation in the scheme of things at the Assembly.
He noted that the reason given by members of the Ekiti State Assembly for the suspension was laughable, unjust and unconstitutional, adding that members of the Assembly were merely acting the script of their principal.

Samuel appealed to well meaning Nigerians, including the leadership of the Peoples Democratic Party, PDP, at the National level and National Assembly to call the Ekiti Assembly to order before they threw the State into avoidable crisis.
He said: “the youths in this local government came out in their numbers to protest against unjust and illegal suspension of the Honourable representing Ekiti East Local Government Constituency 1, in Ekiti State Assembly.
“The suspended member was being persecuted because of his closeness and allegiance to Senator Biodun Olujimi who is also from this community.
“We ask whether there is any law in the land, whether in the party constitution, the House Rule or even the 1999 constitution as amended that forbid people from associating with one another.
“We came to the conclusion that our representative is being punished because of the governorship ambition of Olujimi which we are aware did not go down well with the power that be in Ekiti government house.
“We therefore demand immediate and unconditional reinstatement of lawmaker, in who we are well pleased. If they fail to recall him within one week, they should await further action from us.”
Some of the placards read: “Political hostility must be put to an end in Ekiti State, we say no to illegal suspension of our representative at Ekiti State House of Assembly, if you want peace, do the needful and restore Ojo Ade Fajana, our mandate must not be rubbished by the state Assembly, we say no to autocratic rule in Ekiti State.”
Follow Us on Twitter!