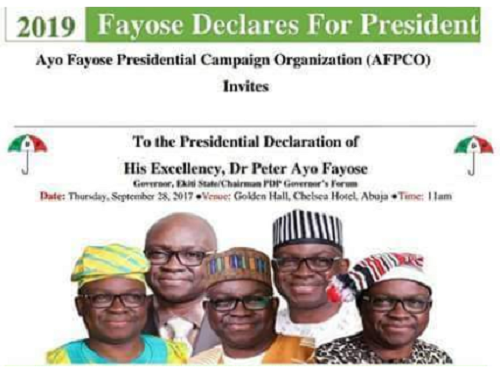 Ekiti State Governor, Ayodele Fayose, is confident of winning the coming presidential election when Nigerians elect a new president in 2019. The governor was hopeful that if supported by his party, the Peoples Democratic Party (PDP), he would take over government from the ruling All Progressives Congress (APC).
“I’m going straight to that Villa. I’m the next president,” he said in a statement issued on Tuesday by his special assistant on public communications and new media, Mr Lere Olayinka. “I have a penchant for taking powers; that one in President Muhammadu Buhari’s hand, I will take it.”
Fayose further revealed plans to formally declare his intention to run for presidency in the general elections on Thursday in Abuja.
He, however, said in a letter addressed to leaders of the PDP that his ambition to be president was without prejudice to the party’s position, but in the overall interest of the party and the country.
The letter read; “It is with a deep sense of responsibility that I write to inform you of my intention to seek the ticket/mandate of our party to contest the 2019 presidential election.

“Considering your support and commitment towards our great party, Peoples Democratic Party (PDP), it becomes imperative to keep you informed and seek your support.
“This ambition, however, is without prejudice to our party’s position but in the overall interest of the party and our country. “I urge that all hands should be on deck to ensure victory at the 2019 presidential election.
“Accept the assurances of my highest regards as a determined presidential hopeful.”
Follow Us on Twitter!