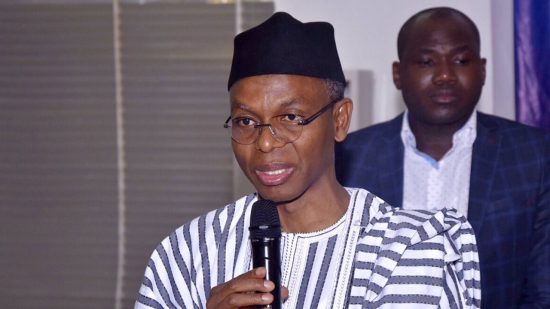 Kaduna State Governor, Nasiru El-Rufai, has identified hate speech and fake news as the biggest threat to national security.
The governor spoke when he received Maj. Gen. Anthony Alolagbe, the new Commander, Operation Safe Haven.
“There is need to curtail the emerging trend of using social media to create crisis in the country.
“I think collectively we have to fight it and discourage those behind it by arresting and prosecuting them.

“In this state, we will not allow anyone engage in propagation of hate speech and fake news; there is provision in the penal code in Kaduna state that deals with that,”‎ he said.
El-Rufai noted that Nigerians were “becoming more aware of the dangers hate speech, fake news and the abuses on social media pose to the peace, unity and stability of this country.”
“There are still challenges, but with the intervention of army and police it has been curtailed to some extent”.
In his remark, Alolagbe said “We have deployed our security and patrol teams to ensure free movement of people carrying out lawful activities, and we have been able to curtail cross boarder banditry”.
Follow Us on Twitter!