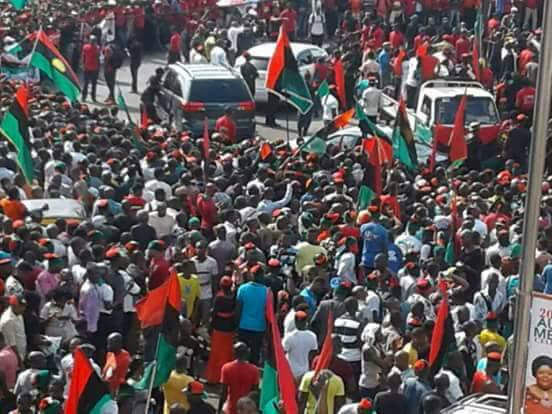 The Indigenous People of Biafra IPOB, on Tuesday described some lawyers serving under the President Muhammadu Buhari-led Federal Government as misfits who don’t understand how the judiciary works.
IPOB said the lawyers find joy in making extra judicial statements capable of influencing the decision of the courts.
The pro-Biafra group made these claims while reacting to a statement credited to the presidency that those who stood as sureties for its leader, Nnmadi Kanu would be arrested if the IPOB leader fails to appear in court during his next adjourned date.
In a statement by its spokesperson, Emma Powerful, IPOB lamented that in Nigeria “there is high level of judicial ignorance where even the Judges are single handedly appointed by the President of Nigeria.”
The statement reads, “Most of them do not understand how the judiciary works, but only parade themselves as legal practitioners, even some who have the badge of Senior Advocates of Nigeria, SAN, are in the category of legal misfits.
“It is very laughable and disappointing to discover that even many half-baked legal practitioners in Nigeria, particularly those in the presidency, serving under the present administration of All Progressives Congress, APC, government do not understand how the judiciary works, but only parades themselves as legal practitioners, and some who have the badge of Senior Advocate of Nigeria; SAN are also in the category of legal misfits.
“This is evidenced as many people including legal practitioners of shame do not know that there are powers exercisable exclusively by the court under a trial Judge such as Justice Binta Nyako.
“It is therefore, an extra-judicial statement capable of influencing the discretion of the court for the principal officer of plaintiff like Nigeria Government in the case between her and Nnamdi Kanu to be heard threatening jail on the sureties of a defendant by any reason.
“The fact that Nigeria government sued a person or group of people does not make Nigeria government usurp the exclusive judicial discretion of the court or the trial Judge. Garba Shehu the media man in the Presidency of Nigeria was heard threatening jail on the sureties of Mazi Nnamdi Kanu as if he has assumed the position of the trial Judge in the court.

“We want all and sundry to understand that the fact that Nigeria government arraigned a defendant does make Nigeria government a Plaintiff and Judge at the same time in the case. A Judge has where his or her right begins and ends, a plaintiff no matter how powerful or influential as he should be, also has where his or her right begins and ends. So is the defendant has where his or her own right begins and ends.
“Here in Nigeria there is high level of judicial ignorance where even the Judges are single handedly appointed by the President of Nigeria, Nigerian government in a case as a plaintiff orders the court where it is standing as a plaintiff to postpone court sitting date to suit its convenient time.
“It is important for IPOB to educate Nigerians to know that it is still in the discretion of Justice Binta Nyako presided court to tell the world on October 17, 2017 whether it is Nigerian Army which invaded the compound of Mazi Nnamdi Kanu and took him away or his sureties who were not even consulted by the Army before the extra-judicial invasion and capturing of Mazi Nnamdi Kanu, and are in the position to produce him in the court.
“IPOB has discovered that over time judicial caricature in Nigeria has made even legal practitioners to lose understanding of the analysis of the law and decided to follow the part of lawlessness, that is why many ignorant and legal misfits are heard saying that a man who Nigeria Army invaded his home and captured is hiding.”
Follow Us on Twitter!