Home » news » Biafra: Nnamdi Kanu’s IPOB Will Be Worse Than Boko Haram If Not Tackled – Coalition

Biafra: Nnamdi Kanu’s IPOB Will Be Worse Than Boko Haram If Not Tackled – Coalition 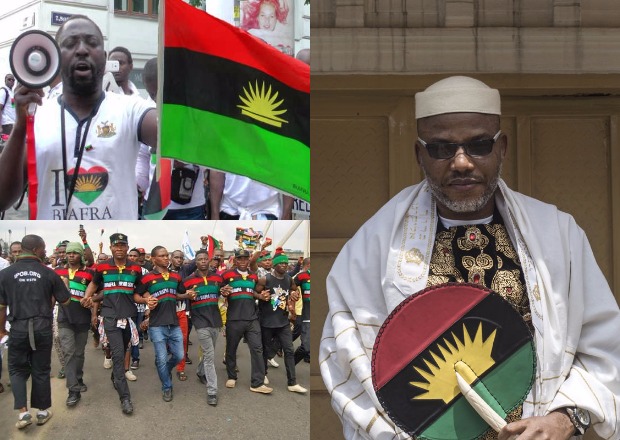 A Coalition of Civil Society Organizations for Transparency and Good Governance has warned that the Nnamdi Kanu led Indigenous People of Biafra (IPOB) will be worse than Boko Haram if not urgently tackled.
The coalition noted that before its proscription by the military and southeast governors, IPOB had exhibited all the characteristics of a terrorists group to the extent that it had become the metaphor for describing the southern equivalent of Boko Haram led by Abubakar Shekau.
Speaking at a press conference in Abuja on Tuesday, the National Coordinator of the organization, Sabo Ode recalled Kanu had declared ‘Biafra Republic’ same as Shekau declared an Islamic Caliphate; where he called Nigerians animals like Shekau called them infidels.
He said, “Both men promised to deliver the heads of Nigerian Presidents to their declared enclaves; IPOB and Boko Haram adopted flags other than the green-white-green; they formed cabinets; they radicalised youths, they called for attacks on Nigeria and Nigerians; and they both declared the state and its military as their enemy.”
Ode said the coalition had observed that some unrepentant members of IPOB have resorted to ramping up their campaign of fake news, which they have been using to brainwash residents in south-east.
“The pseudo-online news portals they deploy for their propaganda have ramped up their farcical activities to an extent that they are now lying against foreign dignitaries in the hope that this would distract the Federal Government from its resolve to protect all Nigerians.
“The latest of such attempt is an headline “EU Condemns and Cautions Nigerian Military, Reject the Declaration of IPOB as a Terrorist Organization”. In the poorly written story cooked up to justify the lying headline, the impression was created that the President of the European Union Commission, Jean-Claude Juncker was in support of a Terrorist organisation destroying Nigeria. Unfortunately for this fake news site, the slightest fact checking reveals no such statement exists in the database of if statements issued by the EU Commission or Juncker.

“For the avoidance of doubt, the most current news about Juncker and the EU is about him doing his best to prevent BREXIT, the break away of Great Britain from the EU even after Britons have voted in a referendum to leave the union. Our view is that it will take a supremely illiterate persons to attempt blackmailing Nigeria with fake news while using an organization and leader that favour more countries staying together to form a super nation.”
Ode called on Nigerians not to be swayed by such lies and to take note of sites that circulate such fake news.
“Such sites also make a mockery of the intellectual capacity of those that shared the fake news on their social media handles. Nothing can be as humiliating as knowing that one has helped publicised a crass lie and one should be rightly ashamed of whatever damage the re-telling of such lies
“IPOB terrorists are by this put on notice that there are international precedents that make people like them liable for their online activities as if same crimes were committed in person physically. Those who circulate fake news for the terror group are as culpable as the ones that carry out attacks on their behalf,” said Ode.
He also cautioned the international community not to be hoodwinked by merchants of darkness bent at destabilizing the country.
“The EU is aware enough about the devastating implications of terrorism. Its member nations are still reeling from taking in refugees from the botched Arab Spring uprising and the wave of destabilization in its wake. Some of these refugees turned out to be embedded terrorists that are now attacking their hosts.”
He further appealed to law enforcement agencies in Nigeria to fish put purveyors of fake news as it is one of the weapons that terrorists are relying on to destabilize Nigeria.