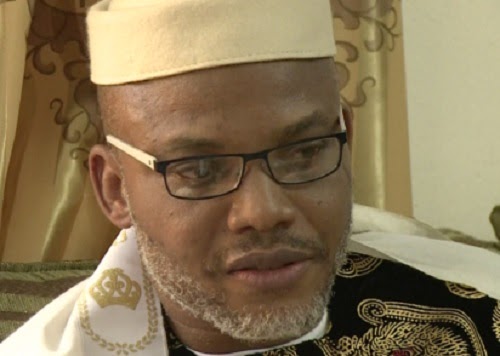 Charles Mbani , a Public Affairs Analyst has chided the leader of the Indigenous People of Biafra, Mazi Nnamdi Kanu for what he described as bringing the doomsday to Igboland by his agitation for Biafra.
The Public Affairs Analyst who wrote a piece from the University town of Nsukka, titled ''Avoiding the Doomsday in Igboland'' published on The Nation Nigeria took the IPOB leader to task for what he described as exploiting the people of limited thinking as he parade an army of followers throughout the southeast and beyond in the hope of restoring the ancient nation of Biafra.
Mr Mbani spared not the IPOB members who he said formed themselves into an unruly mob for the alleged attack on innocent 'Biafran' who he said felt the brunt of the misdirected anger of the IPOB members.
Also in his diatribe against the Indigenous People of Biafra is hate speech which he said has become the group's trademark in their ongoing agitation for Biafra restoration. This, he condemned in the strongest terms.
Read the full article below:
''It has started. Save a miracle another self-inflicted destruction is upon Igboland only that this time it would be far worse than the mindless slaughter from the foolhardiness that began in 1967. The catalyst for this disaster this time around is the leader of the Indigenous People of Biafra, IPOB, Nnamdi Kanu, who is exploiting people of limited thinking.
As of the week of writing, baying mobs that identify as IPOB members attacked soldiers in Kanu’s hometown in Abia state while the Hausa Community bore the brunt of the group’s misdirected anger in Rivers state. In another part of Abia state a pickup truck of the National Health Insurance Scheme, NHIS, was vandalized and the occupants brutalized even though they are of Igbo extraction and even called themselves Biafrans to save their skin, the unruly mob nonetheless attacked.
The ethnically charged belligerence of hate speech has peaked with IPOB members now openly calling for full blown war. The hate speech is only rivaled by the kind of hate motivated actions on the streets like the attack on the NHIS truck and the attacks on Hausa in Rivers. There have been other incidents of IPOB aggression against other Nigerian ethnic nationalities with some unfortunate Igbos also caught in the crossfire of what is meant to harm other Nigerians.
Had the other ethnic groups been of the mind to overlook the unenlightened attitude and behaviour of IPOB members as the product of collective ignorance worsened by brainwashing, the position so far taken by those we call our elites in Igboland have been nothing short of a catastrophe. Their positions, expressed as individuals, organisations, groups and even elected politicians, only reinforced the belief that Kanu with his IPOB speak and acts for the Igbo bloc in an accepted official capacity and that the south-east geo-political zone hate other Nigerians to an extent where they will soon poison the consumable that they sell to the other citizens simply to kill them off and take over their country.
Irrespective of whatever other lies the elites of Igboland are telling other Nigerians and the federal government, their collective hatred of Nigerian and duplicity in representing the issues are well documented. Instead of calling Kanu and his IPOB mob to order the governors of the south-east states rather hosted him to a meeting that rather boosted his demented profile. Someone who lived his life and benefitted from the Nigerian state as a former Minister of Education, in the person of Professor Ben Nwabueze brokered the puerile meeting. Osita Chidoka, a former minister and one-time Corps Marshal of the Federal Road Safety Corps, FRSC, threatened legal action against the army for holding its exercise in the region even though he cannot swear on what is left of his honour that the money he is using to run for governorship election in Anambra state did not come from the sweat of “Nigerians”.
More disgusting is the Ohaneze Ndigbo, the apex socio-cultural Igbo group, which is now behaving like the House of Lords for the defunct Biafra Republic – it is curious that Ohaneze never found the kind of voice it has now for the 16 years the People’s Democratic Party held power at the centre. Of course, the whole Biafra business was the preserve of riff raffs for the duration of Jonathan presidency.On the disgraceful side are the those currently serving in the government who appear to clandestinely in touch with IPOB out of public scrutiny. They remained mute, makingfeeble defence of Nigeria’s unity at best, without making efforts to call their kinsmen to order.Also of note is the interventions of notable Igbo politicians on their various social media handles or walls. They talk (write) as trashy as the primary school dropouts that root for IPOB at Ariara market. Twothings however stand this category out: One, they are beneficiary of the corruption that ruined this country; their children live abroad and often hold dual citizenship so they would not get to partake in the impending doom.
The Igbo intelligentsia is no less dismal as those that should not have been added to this list fought their way unto it by divorcing the concept of universality while embracing the base agitation for the defunct Biafra. It is ridiculous that those who should by virtue of their education and enlightenment should be leading the way have submitted their natural position on the pecking order to IPOB touts. It is sadder still that such failures draw salaries from the federal government only to turn around and deploy the same resource to hurt the integrity of Nigeria.

The worst category of people is the most innocuous. It is the group of the Igbos who think they are insulated from the disaster being prepared by Kanu on account that they live in Lagos, Kano, Abuja or any of the other large Nigerian cities. Unfortunately, with the kind of ethnic strife Kanu and IPOB are brooking, this class of Igbos is going to be the hardest hit if anything goes pear-shaped. Their silence would be their indictment for in the coming days, sitting on the wall would not form part of the equation.
Finally, is the category of those that weep more than the bereaved. But their tears are not for nothing because in supporting evil they see an opportunity for escaping their demons. This pack has the likes of one-time Aviation Minister, Femi Fani-Kayode, who remains under the illusion that the breakup of Nigeria automatically frees him from the corruption charges hanging over him or the Ekiti State Governor, Ayo Fayose, who expects the break-up to free him from answering charges for the crimes he has committed against the Nigerian state for which he will answer once he ends his tenure and loses hi immunity.
The whole assemblage of these groups is united by their ill intent for Nigeria without thoughts for the consequences. They fail to see that it is ridiculous for anyone to say he has declared war on the Federal Government of Nigeria. They are possibly seeing the short term of what they are supporting or tolerating in the southeast. They castigate the Nigerian Army for holding a military operation that can potentially halt the spate of crime in Igboland without censuring IPOB members for pelting the military convoy first. Not that any of the aforementioned groups had ever seen anything wrong in the barrage of hate speech from IPOB and other separatists.
Until such a time that the arrangement becomes otherwise, Abia, Anambra, Ebonyi, Enugu and Imo states remain part of Nigeria to which the army can deploy should the need arises. The growing criminality in the area justifies the launch of Operation Python Dance II. But it seems this deployment is being exploited to start off another civil war. This something the federal government must avoid at all costs.
The imperative at this stage is to immediately explore the alternatives to bring the recalcitrant elements to heel. The rejection of the army deployment should be treated as rejection of the federal government by the all those mentioned. They, possibly, should be given a foretaste of what they are asking for – all federal presence, police,MDAs, health facilities, should be shuttered in the southeast. The portion of the allocation to state that representsecurity vote to state governors should be withheld since the governors are proving to be anti-Nigeria.On a personal level, Nigerians have to start sending a strong message to IPOB and IPOB sympathizers that they are not ‘animals’ living in the ‘zoo’ by boycotting Igbo businesses,products and services. Even the seemingly peaceful and neutral Igbo in Lagos, Abuja, Kano and other places are guilty of a conspiratorial silence and proxy financing. The profits they make from the patronage of other Nigerians is what they reptrate to Igboland, which in turn fund the jobless youths that make up the fighting mob of IPOB.
This blockade of Igboland and boycott of Igbo businesses and products would be the most merciful thing to do as it will likely bring them to their senses without the need for bloodshed. It is the only way left for avoiding the doomsday that is impending in Igboland courtesy Kanu and IPOB.''
*Mbani is National Co-ordinator, South East Restoration Group and writes from Nsukka Road, Opin, Enugu
Follow Us on Twitter!