BIAFRA: Igbos, S/East better off in a restructured Nigeria without further bloodshed 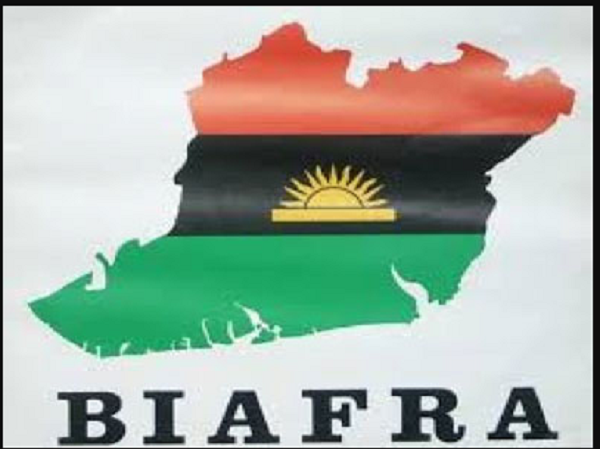 The American War of Independence was not fought and won by an appeal to pity, curses and abusive rhetoric as being employed by Biafra separatists and their supporters in their quest for the proverbial Nirvana.
Today the social media is strewn with hate comments by Biafra agitators thus pitching one tribe against the other while fighting a needless war to actualize Biafra which they see will usher in the proverbial El-Dorado from what they often describe as a failed contraption.
Often times, one is taken aback by the appalling myopic attitude often displayed in the course of laying claims to territories beyond their region as though the original owners and inhabitants of such lands are thoughtless morons and mindless zombies to be dictated to, remote-controlled and subjected to the whims and caprices of another band or platoon of neo-colonizers by the bulk of the agitators who are mainly of Igbo extraction.
As one calls attention to this, all invective and sometimes threats of elimination are employed to hush dissenting voices to silence thereby adding fuel to the already raging flames.
This is real bad if they need reminding.
To Nnamdi Kanu, the embattled top dog of the Indigenous People of Biafra we must now turn. The young man flagged off his campaign of calumny against the Nigerian state which is chargeable with sedition. To some of his Igbo folks and supporters, this amounts to nothing but an exercise of freedom of speech. Can you see the grave danger in their folly?
To them, the young man Nnamdi remains the proverbial Homer that never nods in whom they have found a Mahatma but sadly enough most of the decisions taken by the IPOB top dog against all the voices of reason have often boomeranged.
One of the strategies being adopted by the group is an appeal to pity and sympathy to the international community without taking cognizance of the fact that the ultimate decision to conduct a plebiscite for secession lies with Abuja and not the major world powers whose sympathy they court by a senseless campaign of calumny.
The USA and other major world powers existed when the war of secession was first declared about fifty years ago by the late Biafran warlord, Dim Odumegwu Ojukwu, and the ensuing hostilities that culminated in the loss of no fewer than 2 million lives did not provoke an armed invasion of Nigeria considering the policy  of non-interference in the internal affairs of countries which the above-named are signatories to. The bulk of the Biafra agitators often lose sight of this incontrovertible fact in their search for a whale - one of the many marine deposits -  in the fiery desert instead of the dark, menacing deeps.
Countless resolutions have emanated from the UN to prevail on the state of Israel to grant the Palestinians independence but the latter has been unyielding in this regard. So what gives the gullible lots the vague impression that Israel could prevail on the UN to do a similar thing in Nigeria? Sometimes I wonder why some people often reason through their south pole - the human anus - as the bulk of the agitators do.

Oftentimes, I sit back  hand on chin wondering why his sympathizers and supporters often say he has committed no crime in the course of exercising his freedom of speech. Could any of them define the word 'sedition or libel'  in English grammar which all Kanu's speeches virtually reek of?
Generals Ibrahim Babangida and Theophilus Danjuma who have always maintained sustained silence on his agitation came under his ferocious attack recently. I was taken aback after watching that video clip where he accused them of sodomy! Does he have any tangible proof? Is that not libelous and is libel not a crime in law? So what the hell are they talking about? How could they allow sentiments to becloud their sense of reasoning?
Today, Kanu has made the Igbos endangered species among other ethnic nationalities that make up the Federation of Nigeria by his inconsiderate remarks and repeated acts of provocation against the Nigerian state.
Only recently a video footage went viral where he inaugurated a Secret Service amid a guard of honour! That was one too many and one needed no seer to tell anyone that 'pigs would fly' soon and true to one fears the army struck on September 14 leaving behind a gory tale of tears and blood in Afara-Ukwu community!
Ever since we have been waiting for his followers, sister groups, the faceless militants and of course the Biafra Secret Service (BSS) to actualize their threats by 'sinking the zoo' under the command of a certain 'General' who we all saw in the video footage to mobilize his men to defend and actualize Biafra.
Grapevine sources say Afara-Ukwu community has become as silent as the graveyard after the sensational military invasion about eleven calendar days ago with Kanu gone with the winds leaving behind his rhetoric - ''Anyone that comes to arrest Nnamdi Kanu will die here in Biafraland'' - echoing and re-echoing amid fear of another possible military invasion!
We must and cannot continue to reason like thoughtless morons under the existing circumstances and it is high time the bulk of Biafra agitators knew that there is more to this agitation than meets the eye.
For starters, Biafra will not bring about the much sought after Nirvana or El-Dorado which is weakening the confidence of the youths of the region in the Nigerian state. The dearth of infrastructure in the region should not be blamed on the Federal Government alone but on the political elites of the region who have pocketed the huge federal allocations to the region.
There are matters in the Concurrent List which are also dealt with by the state. How have the five southeast states fared in this regard? Were they able to transform their states with the huge allocations to the region while the federal projects in the region remain blots on the landscape? No! So what gives them the impression that a separate state of Biafra could transform the region to an El-Dorado?
Those behind the agitation who have donated huge cash have only resolved to fight on to enable them recover their money in the eventual emergence of 'Biafra' which may not happen in this generation.
Continuing the fight will only succeed in bringing more woes and misery to the region. The Palestinians have been fighting a war of liberation for a very long time with many UN resolutions drafted and passed in their favour which the state of Israel has consistently refused to recognize and implement.
The North will not consent to the disintegration of Nigeria until their nest is well feathered if you need reminding. Sure, Nigeria will break up one day but that is when the North has put their house in order and had their future well secured. Anything short of this amounts to asking for the moon, quote me anywhere!
I, therefore, deem it absolutely necessary to remind you under the existing circumstances that the Igbos will fare better under a restructured Nigeria and hereby urge them to climb in on the bandwagon in this regard. Kanu's vision to transform the region is still feasible owing to his popularity today.
There is no denying the fact that his popularity across the southeast could enable him foist leaders on the people of the region and implement his manifesto to better the lots of his people and develop the region if he is not being haunted by a consuming ambition to become the 'President of Biafra'. He must remember that Marcus Brutus in the play by Shakespeare titled Julius Caesar told the Roman Plebians that he slew Caesar for being ambitious - in his alleged ambition and burning desire to become the king of Rome. They were best of friends!
In terms of security, state police would emerge under a restructured Nigeria to counter the menace of Fulani herdsmen and all criminal activities in the region. I repeat here with all emphasis, the Igbos, and the southeast will fare better under a restructured Nigeria without further bloodshed.
*Iyoha John Darlington, a Public Affairs analyst, Niger Delta-born social activist and public commentator on national and global issues wrote from Turin, Italy.
*The post ''Igbos, S/East better off in a restructured Nigeria without further bloodshed'' appeared first on The Nigerian Voice.
Disclaimer: Views expressed in any piece we publish remain entirely the author's  and do not represent our editorial policy. DailyGlobeWatch shall, therefore, not be held responsible for the contents or any of its parts thereof.
Follow Us on Twitter!