BIAFRA: I fought to keep Nigeria one, Nnamdi Kanu cannot break it under my watch - Again, President Buhari swears! 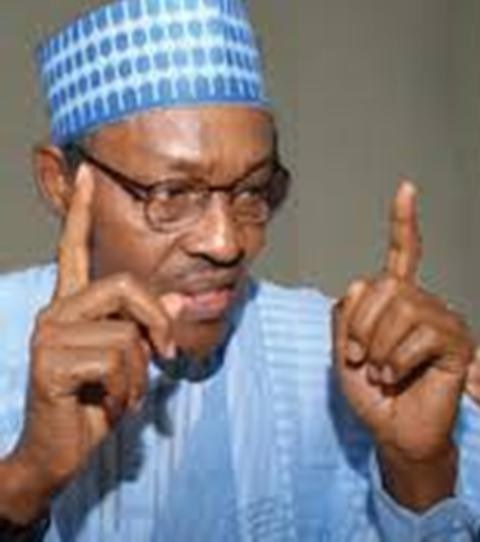 Muhammadu Buhari has said he fought through the peril of war and heart of bullets to keep Nigeria as one indivisible entity and it would be a dereliction of duty to allow anyone or Nnamdi Kanu, the leader of the Indigenous People of Biafra to emerge from nowhere and break it under his watch.
The President made the remark through his adviser on Media and Publicity, Mr. Femi Adesina while speaking in Lagos at the Fifth Anniversary Lecture of News Express, on the restructuring of Nigeria which he said the President was not opposed to in any way provided it does not strike the core of Nigeria's unity.
He said: “I’ve heard the President say it many times that he didn’t fight the civil war to keep Nigeria one and then sit down and watch some people dismember the country.
“He told a story of how he trekked from somewhere in the Eastern part of the country to Gakem in Ogoja in Cross River State.

“He said: ‘After we did all that, do you think we’ll open our eyes and let some people fragment this country?’ He said it’ll never happen. And I agree with him that it should never happen.”
“We have just over 300 ethnic tribes in Nigeria. Diversity should be a tool for unity rather than disunity,” he said.
“That is not to say restructuring debate should not continue; it should continue. When we come to the unanimity of explanation and definition of what restructuring is, then we can move forward,” he said.
However, the Presidential spokesman cautioned Nigerians against the dangers of imbibing fake news and allowing it to shape their opinion.
He said: '' beware of fake news which is an epidemic.
Femi Adesina expressed huge surprised at fake speech purportedly delivered by the President at the United Nations General Assembly and not only circulated online, but was also published by a newspaper on its website.
Follow Us on Twitter!