Home » opinion » BIAFRA: Give us my brother's corpse for proper burial if he has been killed - Kanu's younger brother, Emmanuel tells N/Army

BIAFRA: Give us my brother's corpse for proper burial if he has been killed - Kanu's younger brother, Emmanuel tells N/Army 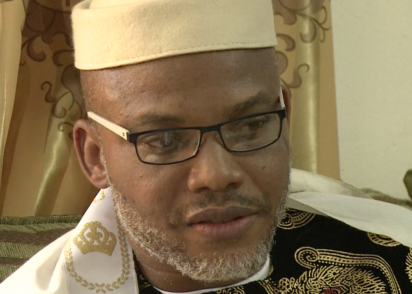 Emmanuel, the younger brother of Nnamdi Kanu, the leader of the Indigenous Peoples of Biafra (IPOB), is asking the Nigerian Army for his brother's corpse for proper burial if he has indeed been killed.
He said his brother, Nnamdi Kanu the embattled IPOB leader has been missing since the military invasion of their country home on September 14.

He said he strongly believes his elder brother fell into the hands of the invading troops on the day the army struck.
He said: “It is either they (soldiers) captured him or killed him when they attacked our house.
''If they captured him, they should release him to the police, and if they have killed him, they should produce the corpse because he was last seen moments before the raid,” he said.