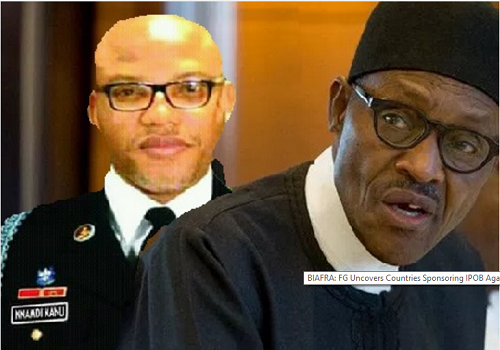 The Federal Government, on Tuesday, said it had identified countries that were backing the IPOB.
The Minister of Information, Alhaji Lai Mohammed, who disclosed this during a Nigerian Television Authority’s programme, Good Morning Nigeria, said the Federal Government was taking steps to block the source of funding of IPOB.
Mohammed, who said the government knew the countries supporting IPOB, stated that he was not at liberty to disclose names of such nations.
He stated,  “We know the sources of their funding,  though I am not at liberty to disclose them here. Terrorists do not publish where their funding comes from. But we know the countries that are supporting IPOB.
“We are taking steps to block them and we are also taking a lot of diplomatic actions in respect of the countries that are supporting them. ”
Mohammed alleged that countries supporting IPOB were doing so based on ignorance, noting that IPOB had hoodwinked them to believe that Nigeria was a country where Muslims persecuted Christians and a country where there was genocide.
He said, “As we speak today, IPOB has written letters to many governments outside Nigeria, international parliaments, sending fake and cloned videos claiming there is genocide in Nigeria.

Mohammed, who expatiated on the activities of IPOB, said the group set up a para-military organisation, a parallel military group, Biafra Secret Service and Biafra National Guard to launch attacks on army installations and soldiers at checkpoints and extort money from innocent people.
He added, “IPOB’s activities are no jokes. If there have not been the proactive actions on the part of the military and the South-East governors, there would have been retaliation from other regions and the entire country would have been set on fire.

“We cannot be talking of semantics or procedure when the nation is moving towards crisis.
“It is only in a banana republic that you can see non-state actors doing what IPOB is doing. The actions by the military and the governors should be seen from the perspective of ensuring internal security and averting chaos.”
He, however, urged the international community not to be sentimental in dealing with IPOB and to be more diligent before making any pronouncement.
He noted that what their countries would never accept in their territories should not be condoned or encouraged in Nigeria.
Follow Us on Twitter!