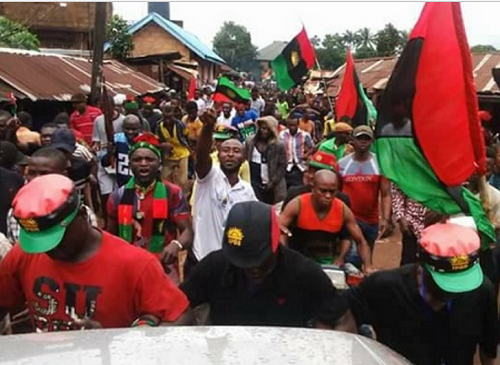 The Federal Government, on Wednesday, alleged that apart from receiving money from looters in Nigeria, a secessionist group, the Indigenous People of Biafra, was receiving a large chunk of its financing from France.
The Minister of Information and Culture, Alhaji Lai Mohammed, said this during an interview with State House correspondents after the Federal Executive Council Meeting at the Presidential Villa, Abuja.
The government had few days ago named Ekiti State Governor, Ayodele Fayose as one of the sponsor of the terrorist group.
Mohammed said it would, however, be difficult to block the funding because some innocent Nigerians were receiving money from France for legitimate reasons.
He said, “We have the records, we know IPOB collects money from many people in diaspora. They collect money from many people in Nigeria, they collect money from some foreign countries, this is clear.
“Let me tell you, the financial headquarters is in France, we know. But you see, can you, as a government, stop people sending money to their parents? You have to block the sources of finance; that is what I said recently.
“It is incontrovertible that some people in diaspora contribute money to IPOB. Where does he get his money from? We know this as a fact.”
The minister said one of the measures the government employed in tackling IPOB before the deployment of soldiers in the South-East, was to reach out to foreign governments for collaboration.
He, however, said the process was long and not always successful.

Mohammed said, for instance, the Federal Government asked the United Kingdom to help shut down Radio Biafra in London from where Kanu was transmitting hate speeches the UK Government rejected the request based on the need to protect freedom of speech.
The minister added, “In tackling IPOB again, there are a few very naughty diplomatic issues which you need to skip. For instance, who does not know that the IPOB international radio is located in London? We know the diplomatic moves we have been taking and approaching the UK and all the damage it (Radio Biafra) has done but they don’t see it that way; for them, it is about freedom of expression.”
Mohammed rejected the argument that IPOB was not a terrorist group.
He argued that Kanu was caught on video in London in 2015 soliciting money for weapons.
He added, “I think anybody, who has watched Nnamdi Kanu’s videos, knows that anywhere he goes, he openly solicits arms and funds. I have a lot of quotations from him as to the violent nature of IPOB.
“In one of his videos, he said if he was arrested, his boys should burn down the country.
Also, a Non-Governmental Organisation, Project Nigeria First, has expressed support for efforts so far made by the Federal Government and governors to forestall a breakdown of law and order in the South-East.
The National Coordinator of the group, Mr. Uche Nwabukwu, said this at a media briefing in Abuja on Wednesday.
He said but for the timely intervention of government at the federal and state levels, especially in the South-East, the activities of IPOB would have thrown the country into chaos.
Follow Us on Twitter!