BIAFRA ALERT: Hours After Buhari Deliver Peace Speech At The UN; Another Group Warns Him – Listen To Obasanjo’s Advice, Call For Referendum Now 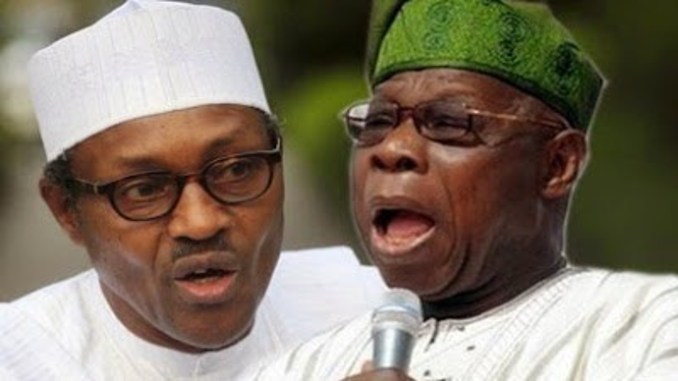 A human rights group in Nigeria, the Centre for Human Rights and Social Justice (CHRSJ) has called on President Muhammadu Buhari not to turn deaf ear into the wise advice of former President, Chief Olusegun Obasanjo that the Federal Government under his watch should dialogue with the Indigenous People of Biafra (IPOB) on their agitation, saying that only genuine referendum were the best option to put the matter to the rest once and for all, adding that Nigeria government should learn from Brexit in 2016.
The rights group in a statement issued to US, strongly condemned the militarization of the zone by President Buhari’s Soldiers, describing the action as the act of dictatorial tendency on the part of Buhari government as a way to return the country back to the dark days of Military era, which people of good will should not allow it to stand.
CHRSJ in that statement signed and issued to US by its Executive Chairman, Comrade Adeniyi, Alimi Sulaiman on Monday, maintained that the member of the group (IPOB) did not commit any offence that could warrant invasion of IPOB leader’s house by the Military, frowning at the way and manner the Nigeria Army declared IPOB as a terror group.
The group maintained that there was no alternative to dispute resolution than dialogue and this is high time for Buhari to dialogue with the leaders and members of the IPOB as being postulated by the former President, maintaining that only true federal structure could suppress ethnic agitations in the land.

It said, “Any government in Nigeria without restructuring is deceptive. Only restructuring of the nation can bring an enduring democracy. There is nobody in the country today who does not appreciate the need to restructure this nation, only those who are mischievous today would not want the restructuring of the country.
“Since Muhammadu Buhari serve actively in despotic Sanni Abacha regime, there was no different in the current Buhari administration. If we have a better Nigeria, we would not have waked up and seen democratic government being dragged military men to confront unarmed members of Indigenous People of Biafra (IPOB).We are just dreaming that there is change, nothing actually has changed. Nigeria is gloomy because there is nothing organically different from the past as Buhari’s government is nothing but hypocritical”.
It therefore called on Buhari led Federal government to withdraw military troops from the South-East as the military men should dissipate their energy on Boko Haram in the North-East and Fulani Herdsmen, adding that the Federal Government should tender public apology to the good people of South-East over the unconstitutional military onslaught.
“When a government mobilizes its entire resources, that is Military and otherwise to suppress a peaceful agitation of an unarmed people, it means such government is driving the country towards dictatorial tendency. Nigeria can only survive as a true federation”, it submitted.
Follow Us on Twitter!