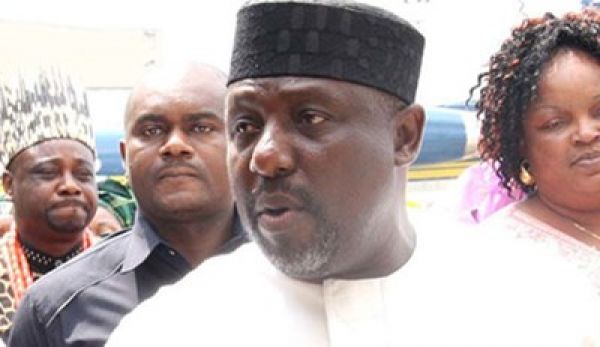 THE Governor of Imo State, Rochas Okorocha has called the attention of Igbos to what the activities of the Indigenous People of Biafra would cost.
He warned that it is very obvious that south-south is not thinking of forming the same country with Igbos and so also is Edo, Rivers, and others.
He warned that the Igbos cannot survive in isolation and warned those tacitly backing IPOB to jettison the idea of separating from Nigeria.
Marginalization of the Igbos, he cautioned, could be expressed in other ways but certainly not the way IPOB took it or their stance towards separation from Nigeria.
He made the remark while speaking to journalists on Thursday.
Governor Okorocha said, “There are better ways; the IPOB way is too primitive. If IPOB must do a thing like that it should have changed the name and fought the way Ijaw youths fought, Arewa youths fought, and they would have made more impact. For everything that comes from the Igbo man, we love to go to the extreme.
“Now you want to separate yourself from Nigeria, meanwhile, South-South will not go with you, Edo, Rivers will not go with you. If you cut us off here now as Southeast, if I need to go to Rivers State, I will go and ask for passport and visa, and we are keeping quiet to say this.

“If there is a crisis now, there is no Hausa man in Igbo land who has a duplex, there is no Yoruba man who has a room and parlour or a N20 million investment in Igbo land, but Igbo have trillions of naira virtually everywhere.
“The same people are asking for secession. If Igbo are asked to go, what happens? They would lose their property, and all of us are keeping quiet, supporting IPOB! It was very childish, and those behind this should stop, that is my advice.
“South-South has produced the president, South-West has produced a president and Vice President, the north has produced many presidents, it is hoping that one day in the next shift, by whatever arrangement, the next people that should be considered is the South-East by Nigeria’s sharing formula.
“So, where are we in our wisdom and the intelligence? That is my position on IPOB; my advice is that Igbo should change their style and condemn IPOB in a manner that should be done and let us flow with the rest of Nigeria for now because we shall benefit more than anyone else.”
Follow Us on Twitter!