Home » news » Apart From Ben Nwabueze; Here’s Full Details Of How Nnamdi Kanu Had Planned To End Biafra Agitation Before The Nigerian Military Invasion Of His Residence

Apart From Ben Nwabueze; Here’s Full Details Of How Nnamdi Kanu Had Planned To End Biafra Agitation Before The Nigerian Military Invasion Of His Residence 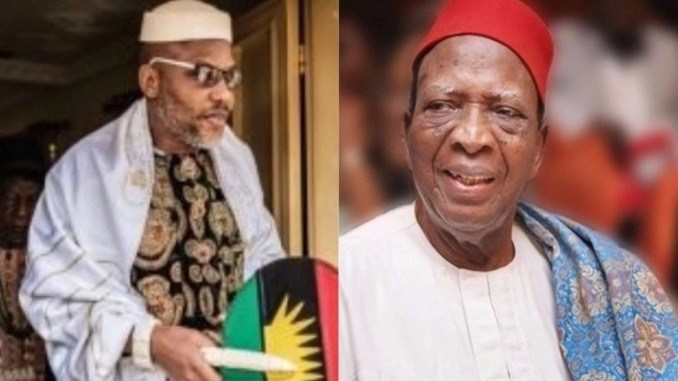 Uko said Nnamdi Kanu had accepted restructuring over absolute Biafra when Nigerian Army attacked
Kanu was reportedly consulting with top members of IPOB over the matter when Army attacked Professor Ben Nwabueze was the one that convinced Kanu during a meeting between him, southeast governors and other leaders in the region A southeast leader Evang.
Elliot Uko has said that the Nigerian Army attacked the Indigenous People of Biafra (IPOB) just when it was about to tone down on its agitation for sovereignty.
According to The Nation, Uko, the deputy secretary of Igbo Leaders of Thought, said Kanu had accepted at a governor with the meeting (where he was present) to reduce his pro-Biafra activities. Uko said in a statement he released on Friday, September 22 truly Prof. Ben Nwabueze had convinced Kanu to drop call for Biafra and accept restructuring instead.
Kanu, he said, had accepted the idea on the condition that he consult with his group members. The statement read in part: “The 30th of August, 2017 meeting between Mazi Nnamdi Kanu and South East governors was historic in the sense that Prof. Ben Nwabueze made Kanu to adjust his position in a landmark development.
“Because of Kanu’s deep respect for Prof. Ben Nwabueze, whom he trusts absolutely, Kanu accepted in principle Prof. Nwabueze’s proposal that IPOB accepts the restructuring of Nigeria and step down the agitation for secession.
But the restructuring should be a return to the 1963 Constitution format. “Kanu, in reverence to Prof. Nwabueze, agreed in principle to the Nwabueze proposal, but insisted on discussing with and carrying along the entire leadership of the IPOB, both at home and in the Diaspora.
“The meeting also agreed to meet again within days in order to fine tune and conclude the agreements. It was also agreed that IPOB will not disrupt any elections. “But most importantly, Kanu accepted Prof. Nwabueze’s suggestions that IPOB demands are not absolute.

Meaning that the group will have to shift ground in subsequent meetings. “Kanu was cautious not to take solo decisions without carrying his group along, and therefore promised to bring the group’s leaders to the next meeting.
“It is therefore my considered opinion that those behind the military invasion and attacks are averse to peaceful resolution of the loss of confidence in Nigeria by millions of eastern youths and have chosen to sustain the status quo through force of arms.”
Uko’s words are a confirmation of an earlier elder statesman Professor Ben Nwabueze had said the leader of IPOB Nnamdi Kanu was about to change his mind and agree to an amicable resolution with the southeast governors after meeting with them.
The report said that Nwabueze, in a statement made available to journalists in Enugu on Monday, September 18, said Kanu was about to change his mind about boycotting the upcoming election in Anambra state.
The elder statesman said Kanu changed his mind after his Umuahia residence was invaded by the Nigerian army.
Follow Us on Twitter!