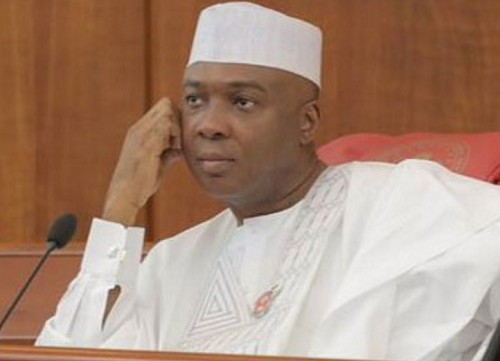 The UN election monitoring group, Peoples Rights to Life Development Foundation, PERLDEF, has called on the Senate President, Dr. Bukola Saraki to save Nigeria's democracy and swear in Senator elect, Bassey Etim, to represent Akwa-Ibom North-East Senatorial District in the Senate.
The group while expressing serious concern over Saraki's continued refusal to swear in Etim, stressed the need to immediately obey court the order that directed ‎him (Saraki) to swear Etim in, since the 8th National Assembly has a life span which is 4 years.
The letter dated September 27,2017 was jointly signed by Comrade Ifot Nathaniel Ifot, National Chairman/Chairman board of Trustees, Comrade Ali Abacha, National Secretary and Chief Oni Emmanuel, Zonal coordinator, South - West.
While maintaining that democracy can only thrives when there is obedience to the rule of law, PERLDEF advised the 8th Assembly to act as a custodian of the rule of law by setting the right precedence.
The group commended the Peoples Democratic Party, PDP, for withdrawing the appeal that sacked Senator Bassey Akpan Albert, before the Court of Appeal in Calabar noting that the PDP appeal was unnecessary as it not against the interest of PDP.
The group called on the leadership of the Senate to immediately swear in Etim to avoid setting a dangerous precedent that may collapse the nascent democracy.
"In view of the urgent need to match your word with action to move the country forward and respect the constitution of Nigeria that guides us as a country, the senate standing rule and the Electoral Act, you are therefore requested to swear in Senator Etim.
" We therefore appeal for your prompt response to our request to swear in Senator Etim to represent the people of the Akwa Ibom North East Senatorial District as the certificate of return issued to the former senator Akpan Bassey has since been withdrawn" the group stated.
Meanwhile, the Senator elect Bassey Etim has called on the Senate President to shun divisive and State politics and focus on enthronement of democratic values that will strengthen the Institution of the Senate and the Constitution of Nigeria which he swore to uphold. Etim noted this during his birthday thanksgiving Service in Akwa Ibom State. Etim further stressed that as a Senate President, national and not parochial interest should be uppermost in legislative agenda.

He condemned the Leadership for continuous paying the sacked Senator and alloying him participate in Senate proceedings. Etim had earlier complaint that some undemocratic element in his state (Akwa Ibom) are asking Saraki not to swear him in.
It will be recalled that Senator Godswill Akpabio had threatened to resign, if Saraki swears Etim in. This has attracted a nationwide condemnation as Senate integrity may be undermined by state intrigues, which was never the case.
This is undemocratic and a serious threat to the rule of law in Nigeria, Etim noted.
While addressing the media, Etim called on all well-meaning Nigerians to prevail on Saraki to swear him in as no one should be allowed to exalt himself above the Constitution of Nigeria, even, when Independent National Electoral Commission (INEC) has complied with the court judgment by issuing Certificate of Returns to him.
Recently, Peoples Democratic Party (PDP) filed a notice of discontinuance, withdrawing its appeal, challenging the victory of Etim in Court, stating in a sworn affidavit filed at the Court of Appeal, Calabar that the judgment that declared Etim winner does not affect the interest of PDP.
This discontinuance is a clear indication that Saraki is embarking on a self-serving mission that is at variance with the rule of law.
The Chief Justice of Nigerian (CJN) has recently call on all established institutions to respect court judgment.
The United States of America Centre of Justice in collaboration with United Nations Human Rights group are currently pressing for ban of the Principal officers of the Senate from entering America and other democratic Nations following the flagrant disobedience to the judgment of the Federal High Court, Uyo delivered on the 27th February, 2017 which declared Etim the winner of Akwa Ibom North East Senatorial seat. Attorney General of the Federation accordingly has advised the Senate President to swear in Etim. Despite that he became adamant. The Akwa Ibom PDP Elders Forum through their Chairman Obong Idereyen Jackot has described Saraki as placing individual interest above National interest which is dangerous to the people of the area particularly as they desire effective leadership in the Senate now.
Follow Us on Twitter!