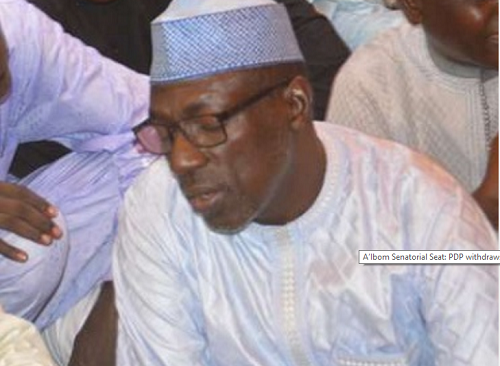 · Says high court judgment which declared Bassey Etim as winner not against party’s interest·As PELDEF applauds Makarfi, says its action is a promotion of internal democracyBy Dansu Peter
The Peoples Democratic Party (PDP) has requested the Court of Appeal sitting in Calabar to dismiss its appeal lodged against a judgment of the Federal high court, Uyo which sacked Mr Albert Akpan from the National Assembly and declared Hon Bassey Etim as lawful replacement.
The party said the judgment of the Uyo Federal high court which sacked Akpan from the Senate for not being its authentic candidate for the 2015 Akwa Ibom senatorial election was not against its interest, hence, unnecessary and ought not to have been filed in the first place. In the notice of discontinuance of the appeal, the PDP told the appellate court thus: ”Take notice that the Appellant (PDP) hereby withdraws all the processes including the Notice of Appeal and the brief of argument filed by the erstwhile counsel for the party.”The decision of the PDP under the leadership of Senator Ahmed Makarfi  to withdraw the appeal, it was learnt, was in the spirit of on-going reconciliation in the party and its dogged commitment to bring sanity into the party as it prepares itself for the 2019 general poll in the country.In a riposte, a United Nations human rights and election monitoring group operating as Peoples Right to Life Development Foundation (PELDEF) has commended Senator  Makarfi-led PDP Caretaker Committee over withdrawal of the appeal, saying the decision amounted to promotion of internal democracy and respect for court judgment.“We must commend Senator Makarfi-led PDP Caretaker Committee for taking this positive step in withdrawing the appeal filed by the party against Etim whom the court declared the winner of 2015 Akwa Ibom North East Senatorial District.“It is very clear that the judgement in the case was not against the party as observed in the notice of discontinuance but against the sacked Senator Akpan who has since appealed it.“Both Akpan and Bassey are members of PDP family. It was expected that PDP should not have filed such appeal in a matter between two members, especially after the court had entered its pronouncements on issues submitted before it. If at all, the party was supposed to ensure the swearing in of Etim as a Senator in obeisance to the court order,” PELDEF added.A Federal high court sitting in Uyo had on February 27, 2017, in a judgment, booted out Mr Bassey Albert Akpan from the National Assembly.That was after the court found that Mr Akpan was not the valid and bonafide candidate of the Peoples Democratic Party (PDP) which won the 2015 general election for the Akwa Ibom North East senatorial seat.


The high court, in the judgment on a pre-election dispute between a former member of House of Representatives, Hon Bassey Etim and Senator Akpan over who between them was the authentic candidate of the PDP for the senatorial seat, specifically held that Akpan had wrongly and illegally represented the Akwa Ibom North East Senatorial District in the National Assembly for 628 days.The life span of the current 8th National Assembly is 1,460 days, commencing from June 9, 2015 when it was inaugurated, to expire June 9, 2019.The trial Federal high court consequently ordered Akpan to vacate forthwith the seat for the bonafide candidate of the PDP, Hon Bassey Etim for the remaining 812 days, and refund to the coffer of the National Assembly, within 90 days, all monies he had collected by way of salary and allowances for the 628 days during which he illegally occupied the seat in the senate.Besides, the court ordered the Independent National Electoral Commission (INEC) to retrieve the certificate of return earlier issued to Akpan and issue a fresh one to the newly declared senator-elect, Mr Bassey Etim, to enable him proceed to the senate for his swearing-in.INEC had since complied with the court order as it issued the certificate of return to Bassey Etim.But the Senate President, Dr Bukola Saraki had flagrantly refused to obey the judgment of the Federal high court, Uyo which directed him to inaugurate Bassey Etim to begin to perform the functions of his office.He had said that he had sent the positive judgment of the court to the legal department of the National Assembly for legal advice on what to do.Hear him: “There’s a process to this and when I get this I always get informed. There are always two sides to a story; I have a senator who says this is the case.“I referred the case to the legal unit to give me a clear advice on this, and once they advise me, I will comply.“ I have explained that to the senator that I have no interest; I want the people of Akwa Ibom, which Senator Akpan represents, to have a representation. I don’t gain anything in it..“I will follow it and I will make it happen,” he said.But a one-time Chief Judge of Lagos State, Justice Samuel Omotunde Ilori had dismissed as ridiculous, untenable and contemptuous the refusal by Saraki to swear in Hon Bassey Etim as ordered by a competent court of jurisdiction.The cerebral judge had said the senate president is not at liberty to seek advice on a positive order of the court.Saraki had also spurned the legal advice from the Office of the Attorney-General of the Federation, Mr Abubakar Malami (SAN) which counselled him to swear in Hon Bassey Etim since there was no stay of execution to stop the implementation of the valid and subsisting high court judgment.Bar and Bench Watch reports that all efforts by Senator Akpan to get a stay of execution since February 27, 2017 till date, to stop Hon Bassey Etim from reaping the fruit of his legal victory in court proved abortive.Worse still, his political party (PDP) which went on appeal with him to challenge the electoral victory of Hon Bassey Etim and the sack of Mr Albert Akpan had also filed a notice of discontinuance of its appeal which it said was unnecessary since it was not against the political party’s interest.In the meantime, Senator Saraki had allowed Mr Akpan to illegally remain in the senate for another 202 days to draw salaries and allowances after the judgment which sacked him and ordered him to refund all the monies he had illegally benefitted from the National Assembly, was handed down while the authentic winner and owner of the seat, Hon Bassey Etim was kept out of the senate for a total period of 830 days as at today.
Follow Us on Twitter!